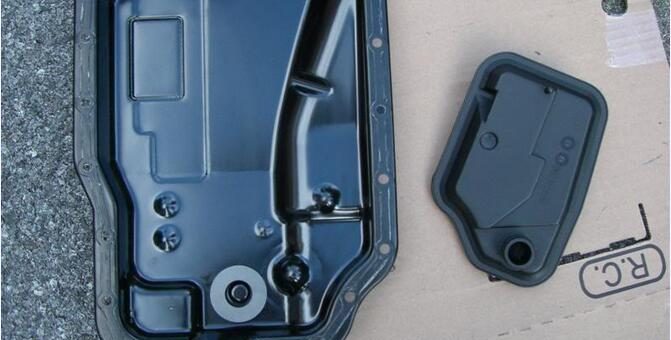 Here i want to share the experience on flush ATX and change filter for my for Ford Focus.I was able to change my tranny fluid with a lot of coaching from Dezurtrat and Whynotthinkwhynot (I’ll call him Alex from now on, too long to type). THANKS GUYS!

Okay, I hope I am able to post the photos properly since I’m using the photobucket thingy. Here we go. This is for anyone and everyone who needs them thar info. But since I’m a n00b myself,please expect some n00b things.

What You Needed:
Ramps, jack/jackstand or lift
ATX trans fluid. I used… 13-14 quarts.. OVERKILL!!
5ft/lbs capable torque wrench
Trans filter with gasket
Catch pan (whatever you wanna use) and a bucket.
screwdriver and a putty knife.

Safety glasses!! and some disposable gloves.
I might have forgotten something else but

Pre-requisite: The car must have been driven for enough time that the tranny is up to operating temperature. I drove it for at least 25 mins. That means the fluid will be hot!! Be careful.

Lift car via jacks/jack stand or ramps or lift. Please chock the wheels and have the emergency brakes on. No pics. If you can’t do all of these… seriously consider NOT doing any work on your Focus!

Locate the cooler lines. This should be on in front of the driver side wheel behind the bumper and place a catch pan underneath it co’z when you pull it out, there will be some trans fluid that will come out. 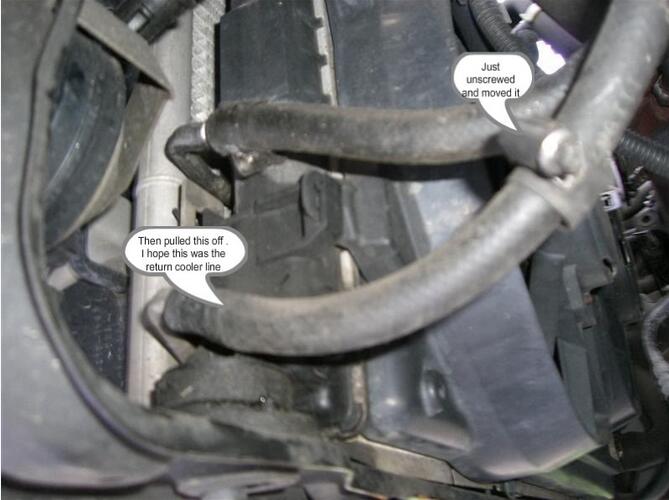 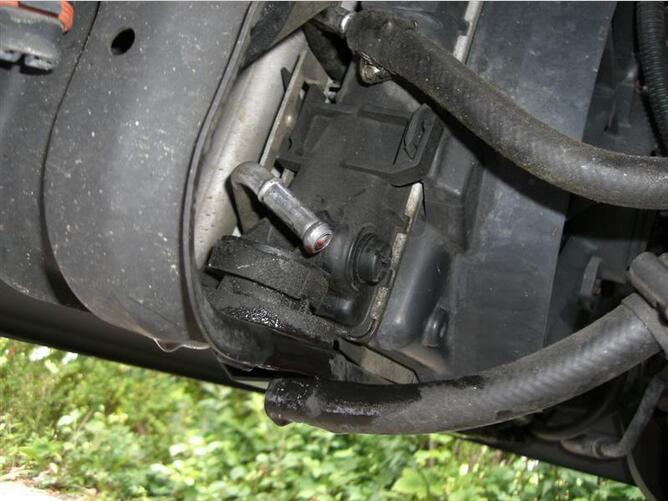 Okay, you guys might have a push clip thing hold the cooler lines.
Then I connected some tubings. Use any tubings that will fit. I didn’t know where the fluid was going to come out so I had the tubings connected on both of them. 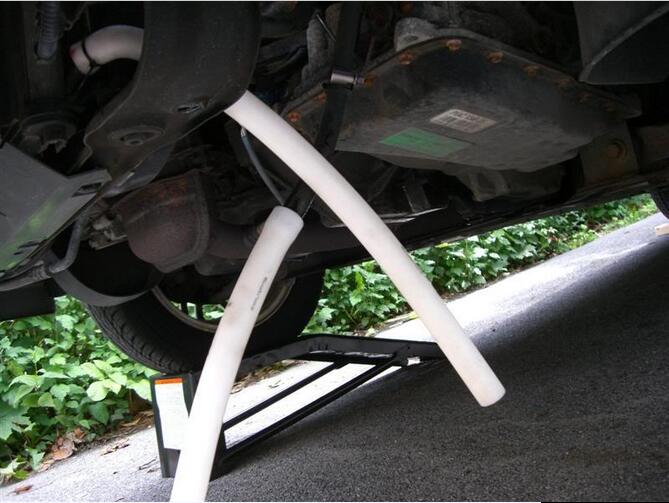 Place them tubings in a bucket. 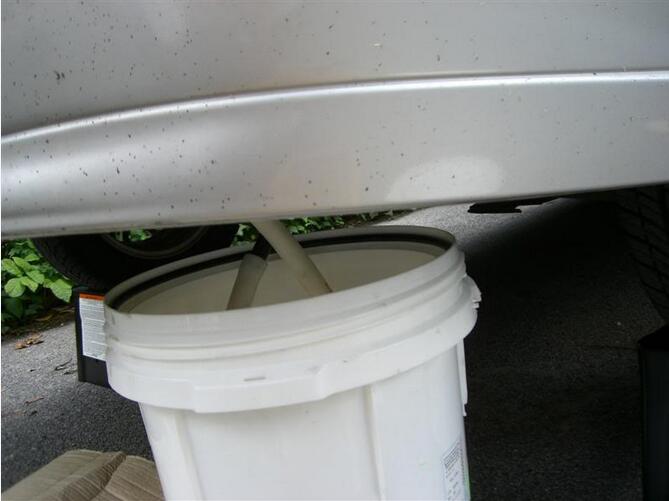 Start the engine and watch them baby flow!! 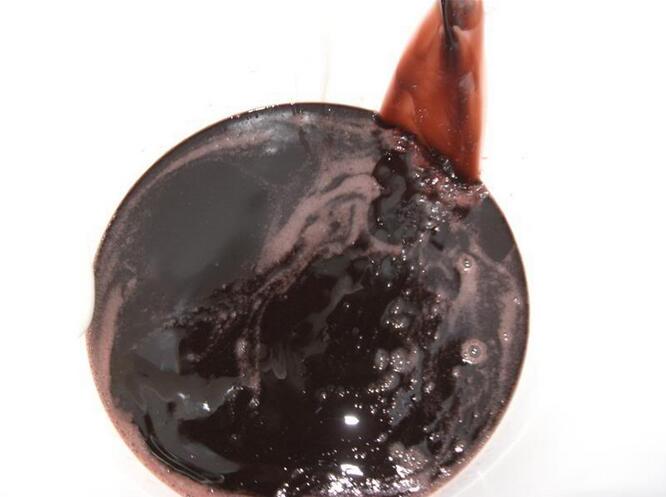 You’ll see it trickle down. It smelled like dead fish. It stank 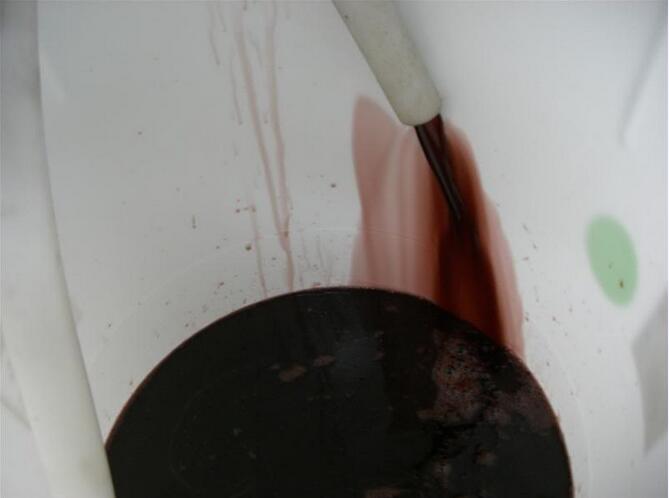 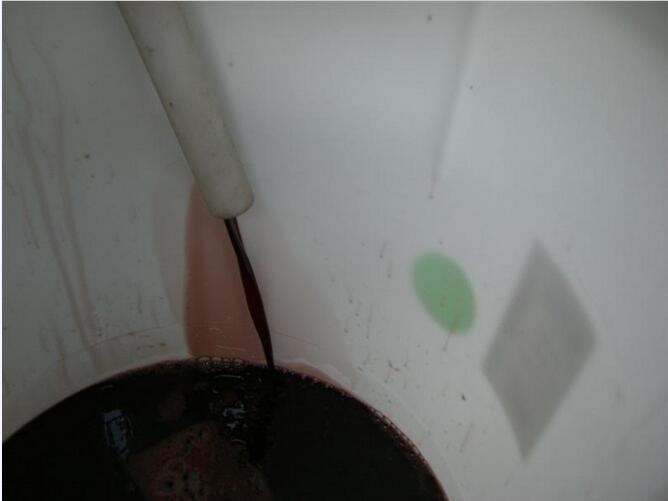 Okay to be honest, this might have been a n00b thing to do. As in might be a bad thing to do, but I stopped the engine and restarted it several times and it pump out a few squirts more of the sticky old fluid.
Now for the tranny pan.
Unscrew all them bolts. 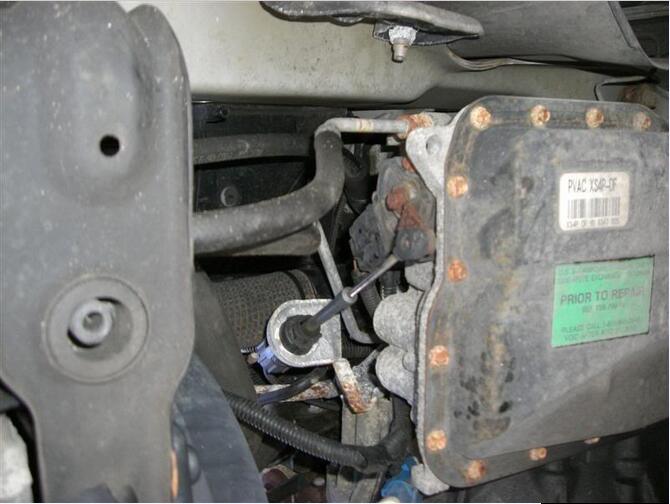 EXCEPT FOR THE two in front so allow it to drain. Place a vessel beneath the pan to catch the remaining fluid.

Now, break the rtv seal using a putty knife and or a screw driver. I used the screw driver first 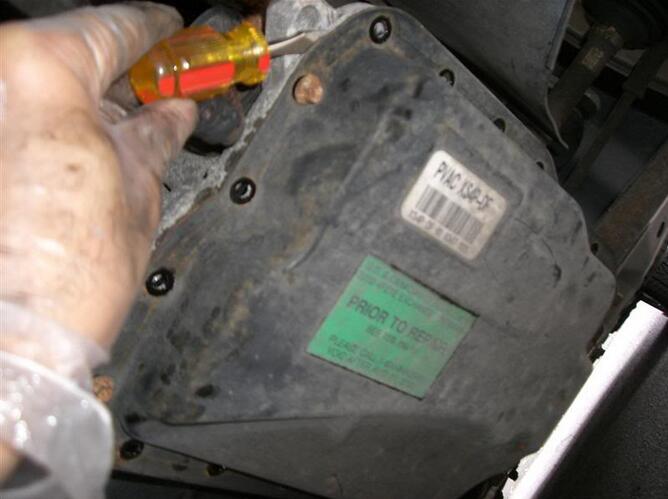 Then open the rest of the seal with a putty knife. Please use a clean one instead of a drity one like I used (n00B moment). Alex suggest to use a plastic one too. Don’t over jab that thing in the pan. You might damage the electrical wire. 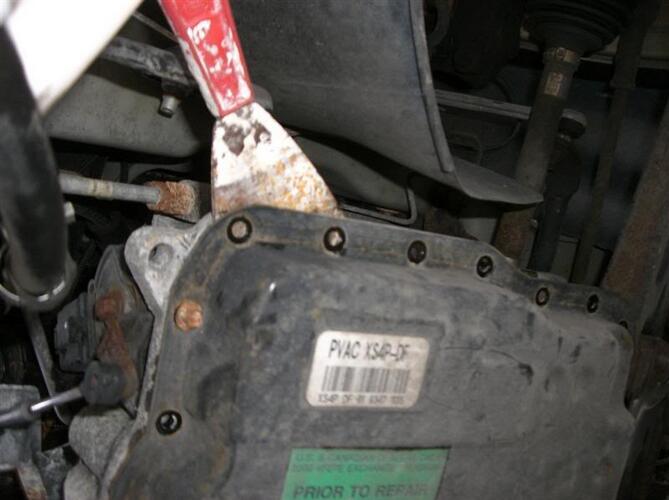 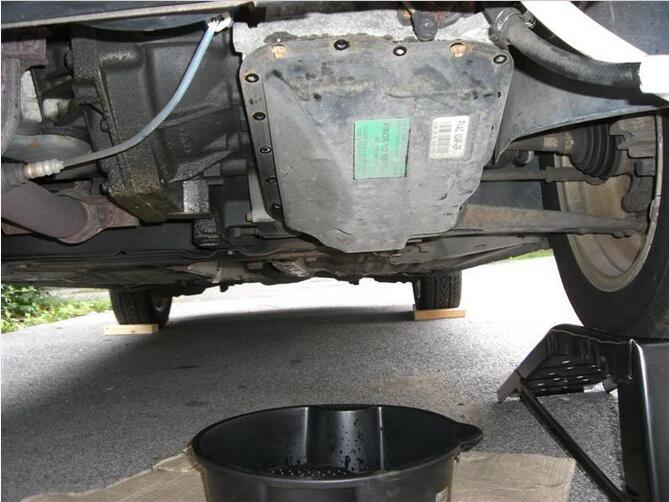 Here is what it looks like inside. Lots of wire thingies. 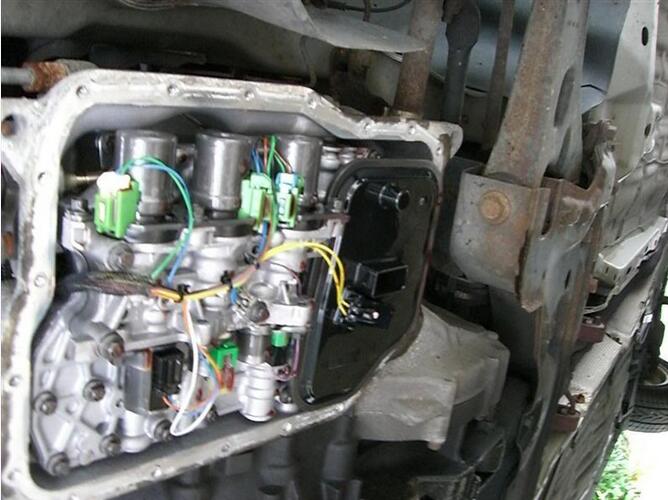 Disconnect that sensor thingy clip. And just pull down the filter. 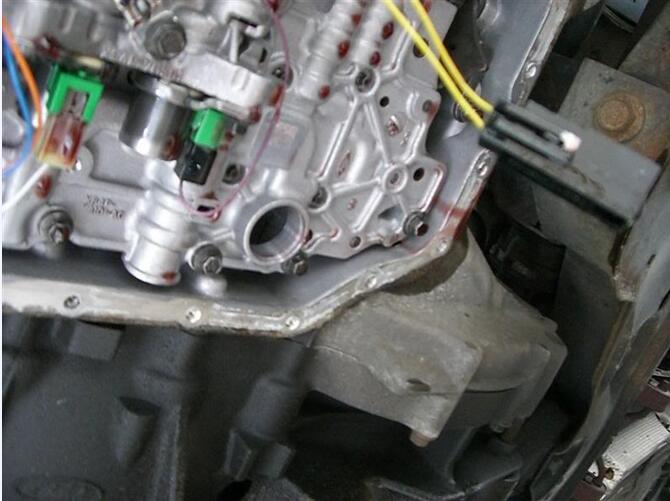 The filter just hangs by this 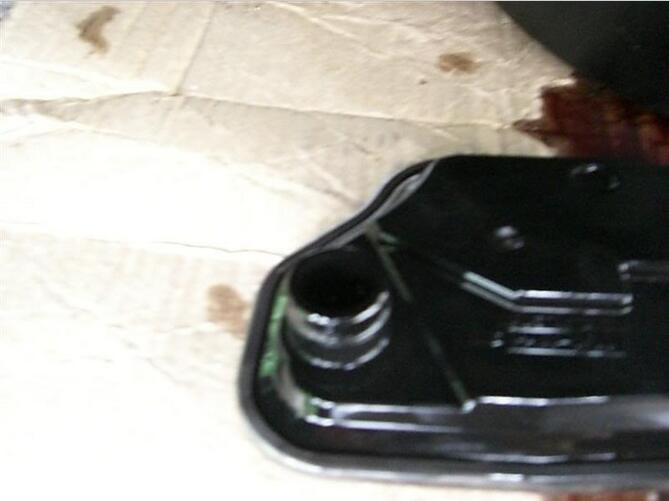 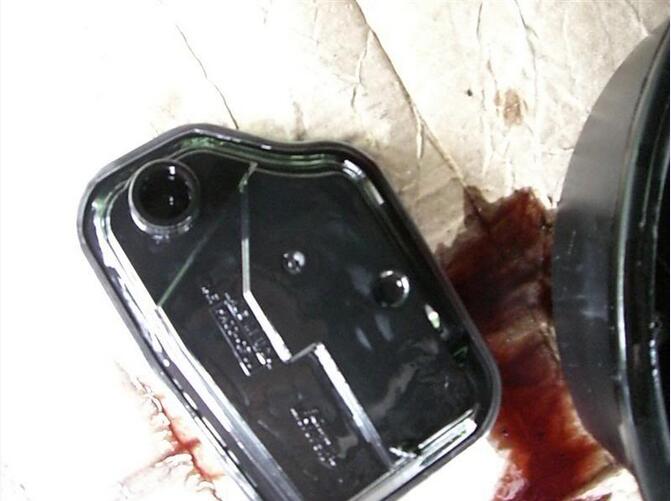 Get ready to clean the tranny pan. It was filty with fine metal shavings. Don’t forget the magnet too! I just did a wash down with DAWN and scrapped off the old rtv gasket. The circle thing is the magnet. 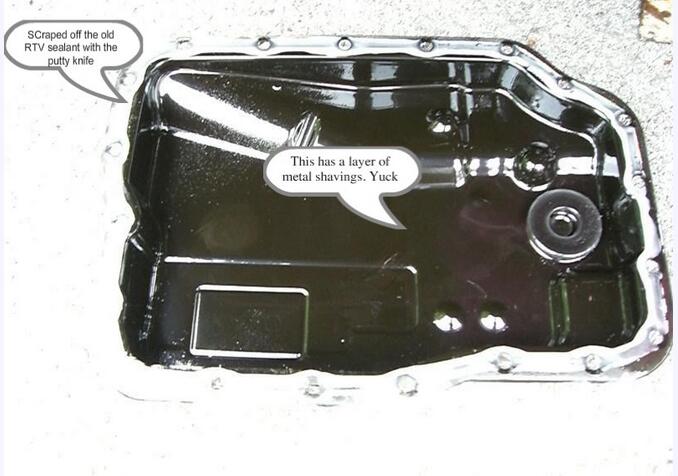 I washed it down and dried it first before scraping of the old rtv. It was easier. 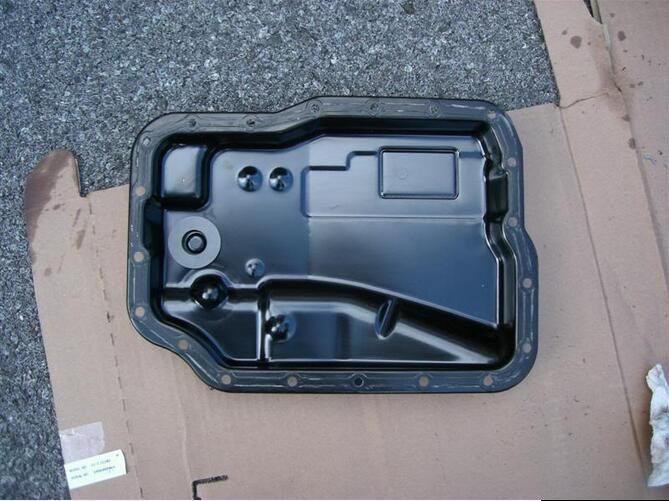 Okay, it wasn’t a perfect. some rtv was left.

Prepare to install the new filter 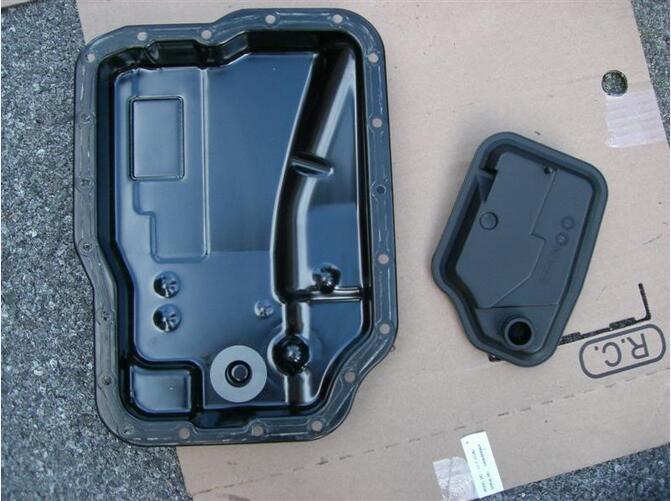 I didn’t take a picture but be sure to aim a small place holder thing on the other side of the filter to make it fit perfectly. You’ll know what I meant when you have a new filter with you. Okay then install the filter and re-connect the sensor clip thing. 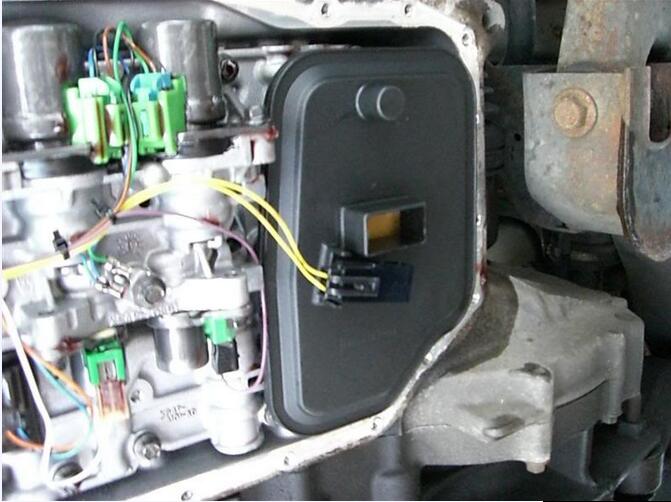 Then set the gasket that came with filter you bought. I made sure it came with a gasket instead of using them rtv liquid gasket thing. 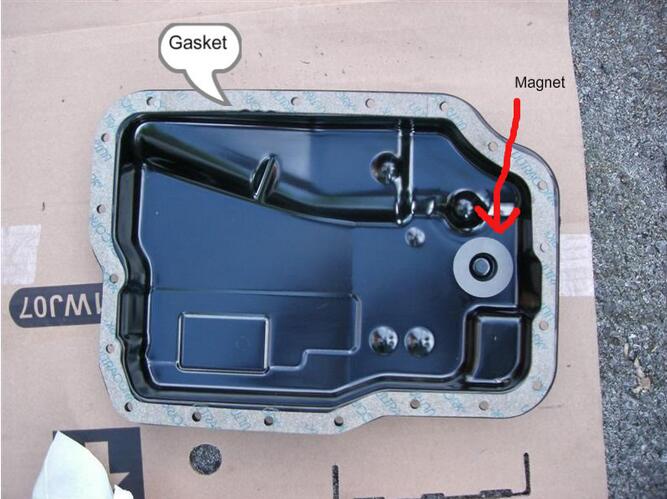 Oh crap… Now that I’m looking at that gasket pic… Was I suppose to peel off that protective layer of the gasket. Does the gasket have a protective sticky that needs to be removed so the gasket get to be stuck on like a sticker… Crap can someone verify? I used the FRAM filter kit.. AAAARRRGGH!!

21) Then just bolt it on via a star cross pattern. Use a torque wrench that can do about 5 pounds per foot… ? (okay, n00b moment. I didn’t use a torque wrench since the one i had was too big. So I.. hand tightened it to the by 5lbs/ft). I don’t have a pic of this.

Okay, heres what happened. I reconnected the cooler line hose and added 3 quarts of tranny fluid. And drove it around for a few days. Then decided to flush the whole thing.. as in remove as much of the old fluid since I didn’t like the thought of having stinky fluid in the tranny. SO I removed the return cooler line and repeated the draining process again.

I used about 13-14 quarts to flush it out. Yeah, pretty expensive since I was using the mobil 1 thing. But I though whatever, this is fun!!

Here’s what I did as per Dezurtrat’s recommendation/experience. I started the engine and drain was in there. once it trickled out. I stop engine, added about 2.5 quarts and start engine.. Repeat. Until the fluid started to come out clean..er cleaner.. and no more stinky smell!! Here’s the comparison on the last flush. I set aside 3.5 full quarts that was not to be used for the flush but for the final fill. 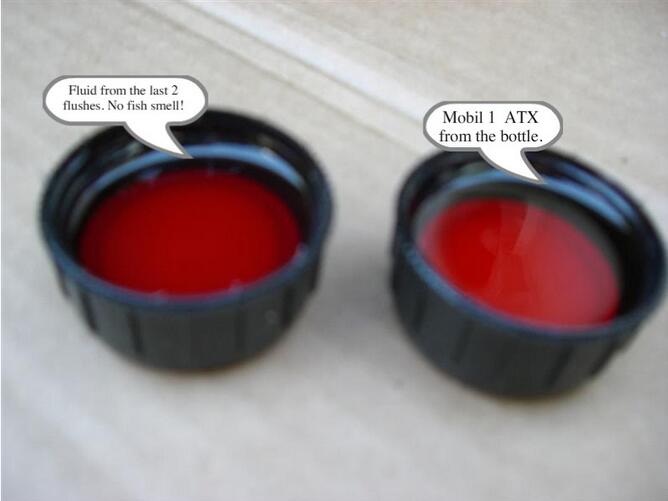 I re-connected cooler line (finally) and only filled it with 2.5 quarts. Currently, I’m in the process of driving it around to and slowly bringing up the fluid level to full, since I was told it’s better to NOT overfill!!! And it’s easier to add than remove tranny fluid.

Oh yeah, be sure to check for leaks too.

I hope you guys find this info useful.